How to Sketch Storyboards in 10 Minutes: No Drawing Skills Needed

Sketching storyboards – cartoon-like drawings showing how people use technology – is a way to get more, high-quality ideas for product design. Sketches are useful for taking notes during a discussion and for getting a team on the same page. Fine art drawing is difficult for many, but anyone can master the basics of sketching storyboards – even without drawing skills. You don't need to be artistic, just follow these simple steps.

This is a quick primer to get started. Thank you to Christina Wodtke and Laura Klein for inspiring this with their workshop at Lean Startup 2015. All you'll need is a pen, a few sheets of paper, and 10 minutes. If you're unaccustomed to drawing, thicker pens like Sharpie markers can be more expressive than fine-tipped pens like ballpoints.

One key element that storyboard often convey is emotion. To learn how to quickly sketch a variety of sentiments, start by folding a piece of paper into thirds horizontally, as though folding a letter. Then unfold the paper and fold it in thirds vertically. You should end up with 9 boxes folded into the paper.

Fold a piece of paper into thirds vertically (left). Then unfold and fold into thirds horizontally (right).

Draw a circle in each of the nine squares, then add two dots to the middle of each circle. These dots are the eyes. Eyes go in the middle of the face, lower than you might think.

Draw a circle in each box (left). Two dots for eyes go in the middle of each circle (right). 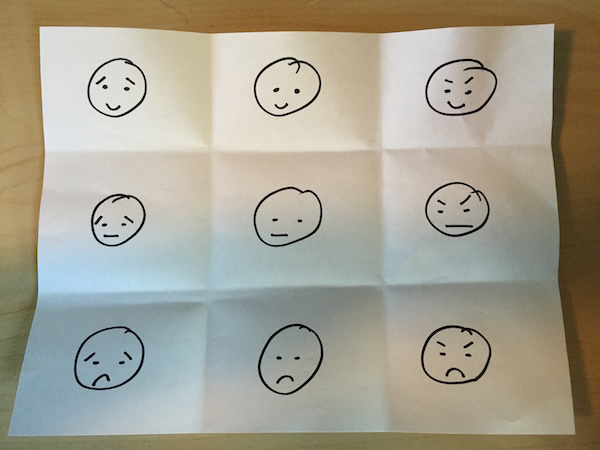 Congratulations, you've done it! You have 9 different facial expression capturing a range of emotions.

From Stick Figures to Star People and Box People

Some of us learn to draw stick figures in grade school, and don't practice beyond the game of Hangman. But with a few minutes of practice with these new forms, you'll be up and running with more expressive figures.

Star people are simple figures whose head, arms, and legs make a star shape. Take a new sheet of paper and draw a star for reference. Underneath it, practice drawing the "body" of the star, which will be the arms and legs of the figure. To do this, imagine tracing around the perimeter of a star. Don't worry about the fifth point/head of the star yet. After you've practiced a few times, draw 10 star people with heads. If you like, experiment with drawing different groups of figures, such as figures of different sizes together. 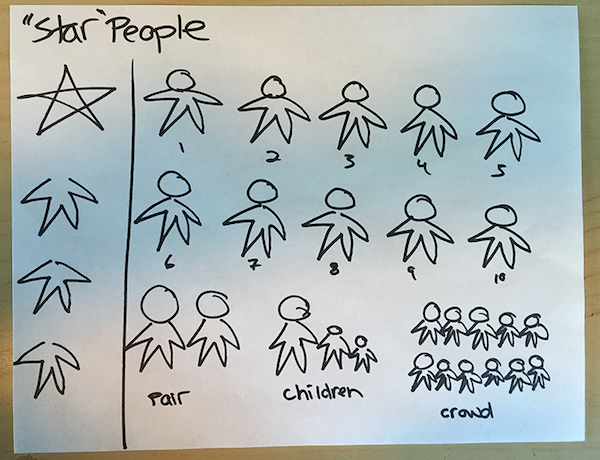 Left column: practice drawing the perimeter of a star as the body of a figure. Right column: 10 star people figures and some groupings of figures.

Box people are an alternative to star people. I personally find star people easier, but box people's arms and legs are easier to position. Practice drawing a page of box people. At the end, you'll probably have a sense of which are easier for you to draw. 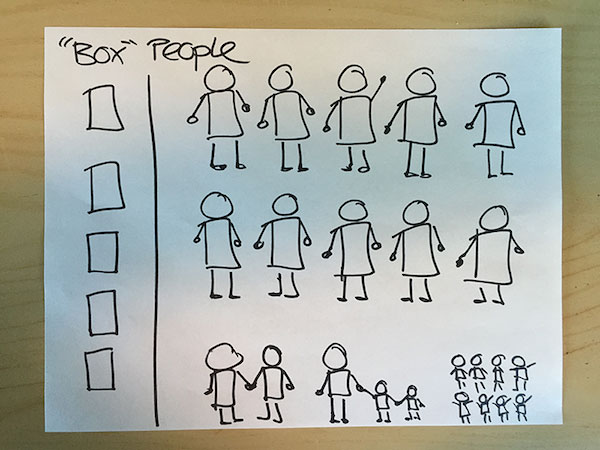 Don't worry if the sketches are messy and the lines aren't square. Just keep practicing.

Putting It All Together

Sketching a storyboard is a way to be specific about the problem you're trying to solve. Here are some examples of star people with faces that tell two simple stories about the emotions people feel when using technology. 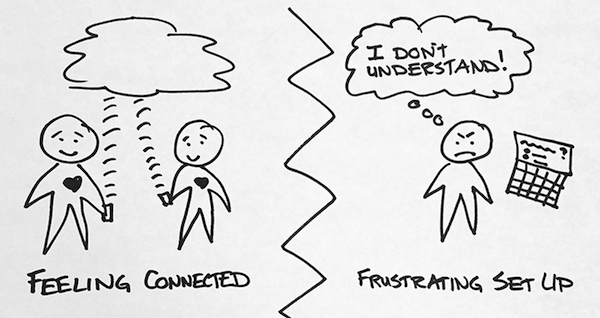 You can see how these brief sketches convey the emotional experience of using technology. Storyboards like these are useful at the beginning of the product development cycle because they help get a team on the same page about what problem they are solving and how they deliver positive feelings. Storyboarding is also a good way to get unstuck if you're not sure where to begin or how to prioritize possible changes. Taking a few minutes to sketch a handful of storyboard panels can uncover new insights into how people use technology.

Christina Wodtke's Library of Visual Thinking includes lots of resources for digging deeper into working visually. If you're unsure what to illustrate with these figures, read Laura Klein on Predictive Personas. Simple sketches like these are a nice way to illustrate predictive personas, far better and more expressive than generic stock photography. Happy sketching.

How to improve the UX of your documentation

A quick card sorting exercise to improve the information architecture of your documentation.