What's next for 'Simply Secure'? Revisiting our name and identity

“Security doesn’t have to be confusing to people.” That’s been Simply Secure’s rallying cry since our founding in 2014. To make our vision of usable security a reality, we’ve contributed design to a variety of tools that enhance security, from Tails to I2P to NoScript. We’ve held salons and a residency around designing for security.

But we’ve done a lot of work that is better described more broadly as design for trustworthy technology. Just in the last year, we’ve launched a decentralization pattern library; a report on trust and transparency in nonprofit funding; a campaign to save internet freedom tech; a community around human rights centered design; a series of videos about trust and responsibility in design; a set of workshops on design for data donation; and much, much more.

This is why we started to feel that the name Simply Secure was getting in our way. We explained again and again to potential collaborators, to funders, and to our community that we work on more than just security-focused tech (and also that we don’t think security is simple!). We clarified over and over that we have nothing to do with a certain IoT home security company. We realized that we needed a name that helped us share and communicate our vision. Personally explaining our name to everyone just isn’t a great use of our time.

We held internal retreats to clarify our mission and vision. We had fun brainstorming wacky name ideas. But just coming up with a new brand by ourselves, or with the help of an outside firm, felt risky.

Because we’re not actually the “end users” of our name, our logo, or our color palette. We’re not the most important stakeholders. We’re not the people whose opinion most matters. You are.

If we rename ourselves and you, reading this, don’t get what we did and why, if you don’t groove on it… well, then we can’t really serve our community effectively, and we’ve done something wrong.

That’s why we reached out to Una Lee of And Also Too. Una and her team are experts in co-design: the process of designing and deciding together with a community, rather than behind closed doors. We were delighted when Una agreed to mentor us through our own co-design process. In September 2020, we officially launched the search for Simply Secure’s new name, and we committed ourselves to sharing our process publicly as we go. So hold on tight, and welcome aboard!

We asked you – here’s what you said

Our first step was to send out a 5-minute survey asking what our community thought of Simply Secure’s current name and visual style. The survey was open for 3 weeks and received 54 responses. Here’s what we found out.

This could be anything about security or safety. How would anyone know it’s about design/UX?

It’s not holistic or broad enough. The people I’ve worked with bring elegance and clarity to projects.

No, because you work on many more issues than just security, and it doesn’t speak to the community-oriented dynamic that you cultivate as an org

Not everyone dislikes our name. However, when describing what we do, those respondents say, “you make security technology easier to use.” So it makes sense to us that these folks think our name is a good fit for us – for the security usability portion of our work, “Simply Secure” actually is a pretty good description.

[I don’t like the name for you] because I think your work has broadened beyond a focus on security. But I do think it is a good name.

Five respondents mentioned the similarity to SimpliSafe, a US-based IoT home security company. Given that SimpliSafe’s privacy policy gives the company license to store and analyze recordings of your home, we’re not particularly happy about this association.

One big surprise for us: five respondents said that they like the sticky notes on the logo. The funny thing is, sticky notes actually weren’t at all what we had in mind. The proportions of the squares in the logo are supposed to represent the Fibonacci sequence, which is a key part of many cryptography algorithms. But now that we see the “sticky notes” in the logo, we kind of love it. 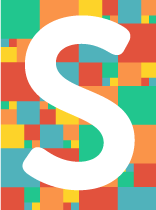 Five more respondents said the logo reminds them of various corporate apps; Slack came up a few times, as did Google. Given the type of work we do, these aren’t exactly the mental connections we want folks to have when they think of us.

Respondents generally appreciated that our look is not dark, scary, or self-important. But we heard a lot of adjectives like “childish,” “kindergarten-ish,” and “playful.” Many people told us that our imagery was too fun and light for the heavy, intense, and even dangerous topics we deal with. 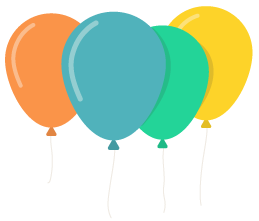 It’s not very memorable. I get children’s birthday party from it.

Too happy and bright - your work is about serious and concerning topics.

The message we heard was: it’s refreshing that we present ourselves as welcoming and humble! But we also need to show that we take our work seriously. Imagery like balloons and cookies, and an aesthetic based on big, flat, brightly colored shapes, don’t communicate that we are a trustworthy, experienced partner for sensitive design and facilitation work. 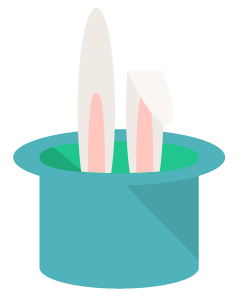 I worry that the rabbit ears in the hat makes a gesture toward being bewildering, rather than simple.

Out of 54 respondents, not a single person said that they liked our visual style in general, or that they thought it was a good representation of us. This confirms our hunch that we really need to rethink our look and feel.

We sought out survey responses from people who already knew at least a little bit about us, either as individuals or as an organization. Respondents were very consistent in how they described our values and attitudes: putting people first, breaking down boundaries around how tech gets created, and paying attention to the “edges” often neglected by mainstream tech.

Their answers to “what does Simply Secure do?” were more varied, and depended on the work they’d done with us. Here are the most prominent types of answers we got.

A convener, a facilitator, a co-designer with a diverse outlook and commitment to security.

They help tech projects think carefully about how to design projects with security and usability in mind.

Use data and storytelling to support organizational growth.

One of the most common responses was the feeling that people are seeing the tip of the iceberg. There’s a feeling that we do “more,” but it’s not always clear what.

I know about some of the work around design, but honestly I am not sure what the day-to-day of Simply Secure looks like.

You do great projects but don’t get a lot of opportunity to talk about them.

The intangible attributes that respondents mentioned were lovely to read, and a nice pick-me-up in tough times. Please remember to actually verbalize your compliments to the people you admire – it means a lot. We all need the boost right now.

Super inspired by your work!

54 people responded to the survey. Here are some charts showing the demographic breakdown.

For the multiple-response questions, we didn’t include responses checked by only 1 respondent, in order to keep the chart size manageable. We occasionally omitted custom responses from the charts in order to protect respondents’ privacy.

We’re going to undertake this process together with an advisory committee, made up of people who are part of our community. Through a series of workshops, they’ll help us generate ideas, narrow down our options, and recommend a new name and visual style. We’ll announce the advisory committee on this blog shortly.

Any questions? Any thoughts? Drop a line anytime to Molly Wilson and Kelsey Smith at refresh@simplysecure.org. We’re looking forward to going on this journey with you!