The writing in your user interface is an opportunity to encourage people to use your product. Writing in interfaces includes everything from the words in an in-app setup tutorial to a website's navigation menu. Because there is both technical complexity and high stakes for user failure, careful language is key to getting mass audiences to adopt secure communication tools.

Explaining how things work isn't straightforward. Many secure communication apps struggle with conveying too much technical information to an overwhelmed user who, for example, doesn't care about the difference between DSA and RSA keys. Careful UX copywriting avoids this pitfall.

Even a simple explanation can create a negative emotional reaction when it sounds like jargon to a general audience. Jargon is off-putting, whether it's Silicon Valley buzzwords or bureaucratic govermentese, because it conveys that the service is untrustworthy. To stamp out jargon, Mail Chimp's Content Style Guide on GitHub includes this list of words to avoid using. They've flagged a bunch of corporate-speak words as inappropriate. Mail Chimp is a sales tool for sending customized email and newsletters, so "Incentivizing your ninjas to crush it!" could be a reasonable explanation of their value to their customers who are marketing professionals, but their writing is careful to use vocabulary that is accessible to a broader audience.

Reducing the need for support

With good UX copywriting directly in the interface, the need for training and other kinds of support decreases. Consider this excerpt from 18F's writing guide for U.S. Government websites:

"FAQs are bad. We don't like them. If you write content by starting with user needs, you won't need to use FAQs. … If you're thinking about adding FAQs, consider reviewing the content on your website that is generating questions and think about how you can change the content or design to answer the question — or provide an answer in context to prevent people from visiting an additional webpage to find the answer." – 18F Content Guide

Similarly, the Gov.UK writing guide does a good job of explaining how to make complex information accessible to a broad audience. Just as a piece of consumer software must be understandable to many types of users to be successful, UK government publications must reach and be useful to a broad spectrum of readers, from English-language learners, to populations with low levels of literacy, and citizens with a range of accessibility challenges.

With good UX copywriting directly in the interface, the need for training and other kinds of support decreases.

In addition to complete style guides, here are some practical tips:

My favorite suggestion (which makes both lists) is to be make your writing shorter. To trim excess words, try the Hemingway App. It was named after the writer whose work was famous for its short, clear sentences. 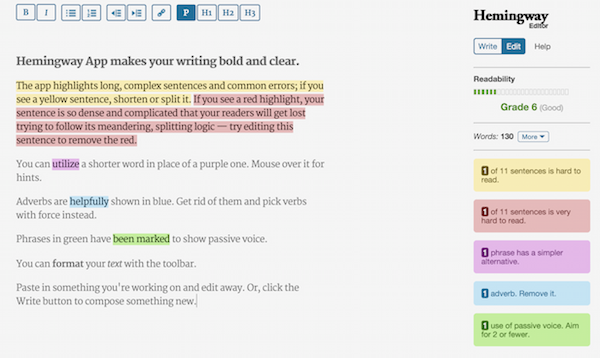 Your Software Can Help At-risk People, Too

Web browsers are utility software; they are designed to work for all people. Not only must their features meet the needs of average members of a population, they must also work for people with special needs. As Firefox says on its mobile accessibility features page, the browser has been "designed to meet the needs of the broadest population possible," but "sometimes that is not enough." In particular, software that is built for everyone can too often leave people with specific security or privacy needs at risk.