If you're new to UX design, wireframing is a powerful tool to understand how users experience your software. People with technical backgrounds benefit from wireframing because it forces them to take a step back from their coding mentality. Rather than focusing on the technical architecture, wireframing exposes the user-experience structure: how the user moves from one screen to another.

Example wireframes taken from GoodUI.org. Both show the same content organized with two different structures, but the left wireframe is better because it discloses choices rather than keeping them hidden.

Wireframes are useful because they offer a stripped down, visual experience made up of plain boxes and lines—no formatting, no styling, no graphic design. That's right; improving your UX skills starts with abandoning colors and styles. If you can draw mostly straight lines, you've got what it takes.

Teams use wireframes at many points during the design process. They can use it to conceptualize a design, to critique their design internally, and to get reactions from testers. Here are three advantages of wireframing:

Wireframing is a quick way to validate your design. It saves on wasted development time, and anyone can do it. When you are ready to test out a new interface, wireframing will help you drill down to the best UI and help you organize your development priorities.

You can start wireframing with little more than an hour and some basic office supplies. There are numerous apps such as Balsamiq and Sketch for making wireframes, but doing it by hand is more effective when you're new to the process. Don't waste time mastering wireframe software; spend that time building your UX acumen.

First, pick the website or app you want to analyze. I picked Twitter's iOS app as the basis for my wireframes in this exercise. Even though I know the app well, taking the time to wireframe it helped me see the app more critically, and what I learned from wireframing will inform my design choices for similar apps.

This tutorial works by tracing an existing app or website. To do that, you need paper printouts. If you're analyzing a website, just print every page. If you picked an iOS app like me, here's one way to print from iOS: 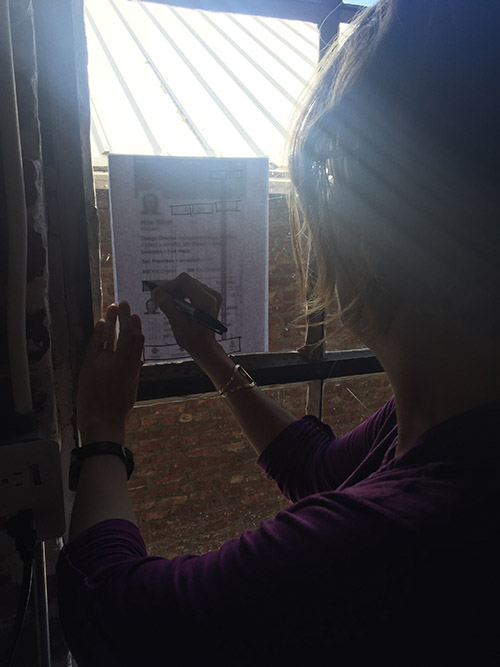 Tracing at a window. 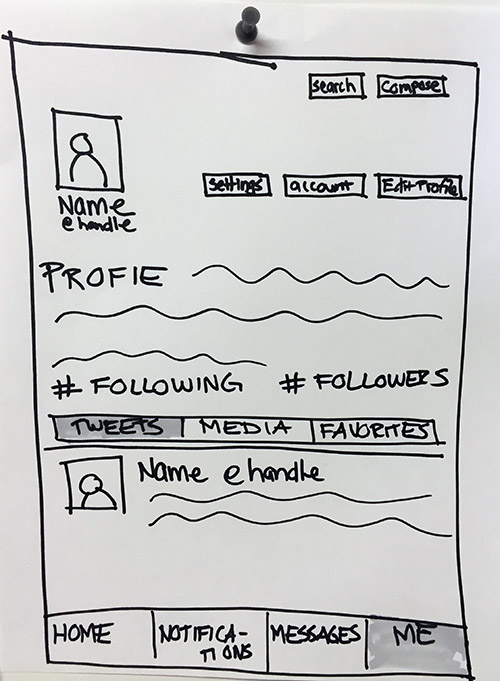 Wireframing at the right level of abstraction

Since navigation is the focus of my wireframe, I only use color (gray shading in this case) to indicate what state the UI is in. Use abstractions such as wavy lines or lorem ipsum copy to represent user-generated content. Abstract representations keep testers focused on the navigation.

Other elements can also cause confusion, even if users are generally familiar with them. When getting user feedback on a Twitter wireframe, things like "Name @handle" can be distracting. To avoid this, use something made up but recognizable like "Marie Curie @mcurie" if you plan to show that element to testers. If the audiences for your wireframe are people who are comfortable with pseudocodes, using "Name @handle" probably won't throw them off, and in those cases, that level of abstraction is fine.

These images show a progression from screen printout at left to the most abstract zones of activity. 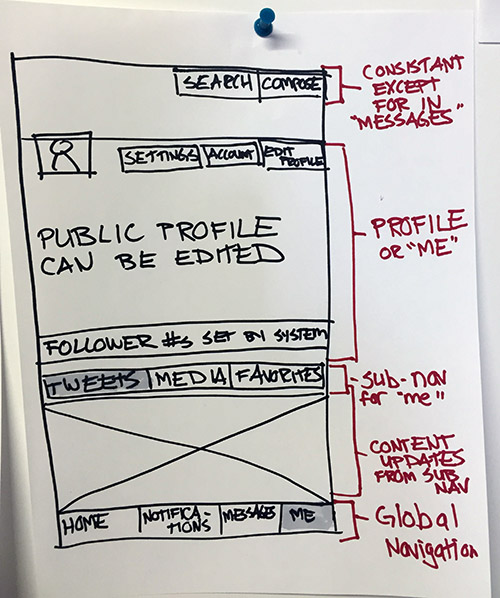 The red writing are callouts that describe what activity happens in each zone, with an emphasis on navigation.

The next image is even more abstract, and it raises the question: Why are there four different button blocks spread across multiple zones? 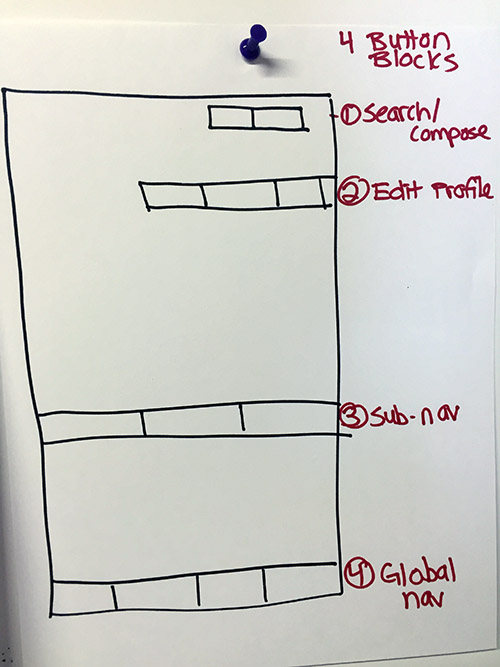 This wireframe of the Twitter iOS app really spotlights the trade-offs in navigation. There are four different areas of navigation (why?), and instead of using hamburger-, sidebar-, or other types of menus, the designers settled on buttons. There are positive and negative tradeoffs here. On the one hand, the buttons are self-disclosing, and it is immediately clear what sort of operations are possible. On the other hand, there's a lot of clutter, and users have to look in multiple places to perform the operation they want.

To practice wireframing, I suggest:

Have you ever given a slide presentation only to see a typo that you didn't catch beforehand? Even though you rehearsed many times, the typo didn't leap out at you until now. When it comes to UI, wireframing ensures against this. Like the exercise in this post, wireframing an app that you're building will quickly reveal problems that you didn't expect. Wireframing takes you out of the code and offers another context to critically examine engineering and design choices.

Whether you're working solo or on a team, wireframing is a quick and powerful way to think about the structure of your app and to prioritize improvements.

Human-centered Design, Where to Start?

Instead of learning methods and tools, you can start by developing a design mindset. From our video series, Design Spots.

Be a self-starter: UX educational resources

Are you part of the technical team? This list of resources will help you apply a design perspective to your development work.