If you're coming to the study of security and privacy from another field, it can sometimes be tough to get a clear answer to what seems like a simple question: Is this app secure? However, if you're working on the user experience for that software, it's critical that you understand the assumptions that security experts are making about your users and their behavior – and not just take the experts' word that all is well.

I've written before that neither security nor usability are binary properties. In a nutshell, this means that there's a lot of gray area when it comes to deciding whether something is secure or insecure. Security enthusiasts often come at the problem by answering one question: Is this the most secure solution available? Meanwhile, non-experts are actually asking a different one: Is this secure enough for what I want to do? Like usability, security is defined as a function of a particular set of users and their needs – more specifically, as a function of the threats they face. 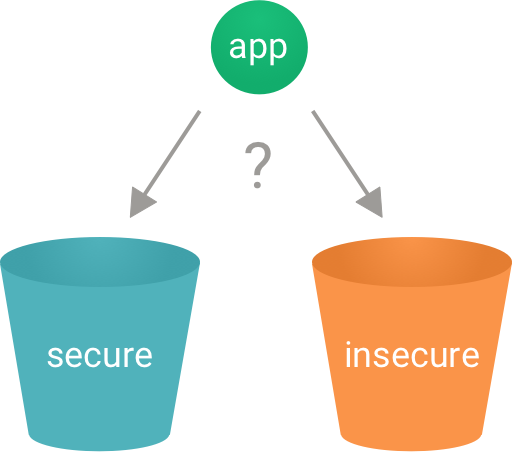 It’s often hard to classify an app as being secure or insecure without additional context about the user and their goals.

If you're a designer, usability researcher, or other UX professional collaborating with a security engineer for the first time, it may be uncomfortable to push back and ask for more information about the app's security features, especially if the answers are full of unfamiliar acronyms and buzzwords. And it's tempting as a security expert to say something along the lines of, "trust me; this is secure." But digging in to this kind of cross-discipline dialogue can be essential for identifying places that users will get tripped up. Talking across the divide can prevent an app that is secure in theory from becoming seriously flawed in practice.

Here are some questions that teams of security experts and UX professionals should be able to answer about the software they are building together. This kind of conversation is best held in front of a whiteboard, where team members can communicate visually as well as verbally. Security experts should challenge themselves to offer complete explanations in accessible terms. Their partners should be vocal when a concept is not clear.

This is just a starting point in what we hope will become an ongoing conversation between UX professionals and their security-minded colleagues. Great software is built around excellent user experiences, and keeping users' data safe is a core (if often implicit) user need. For this reason, we believe designers and UX researchers can be important advocates for user security. Conversations across the divide are an important first step to making this a reality.

Would your team like help talking through these types of issues? We can lend a hand. Drop us a line at contact@simplysecure.org.

Most of the time, honest conversations about sensitive topics happen between people who have known each other a long time, who've worked together, who've built up a foundation of trust. They don't happen when some unknown people cold-email you and ask to make a one-hour appointment with you – right?