In 2017 we did user research in San Francisco to speak with people who used store branded loyalty and couponing apps, such as the Starbucks or GroupOn apps. Our eight participants were selected on the basis of frequent use of shopping and loyalty apps and regional diversity. We did not ask invasive questions about income, and instead recruited people from a range of professions and communities, such as chef from San Rafael and UX designer from Palo Alto. Two of our participants used Android, although one of them also used an iPhone as a personal phone. The remaining 6 used iPhones.

The goal was to understand why people used these apps and to explore ideas for personal data markets that would give individuals more control over how their data was used and who benefited financially.

Our participants were enthusiastic users of:

No Surprises About Data Sharing

Our hypothesis was that people would not understand what data apps gather about them, and once they did might feel that they were not getting a good deal by exchanging their data for coupons. We expected showing participants their app settings for location tracking and contact sharing would lead to surprise and outrage, and that would be a catalyst for a discussion about what apps data collect.

Our hypothesis was wrong. None of the participants were surprised about the data being gathered by their apps. All of them were all familiar with privacy settings and had made some changes in configuration. A common pattern was to deny at least one app permission because they didn’t trust one particular app, but granting it to others. 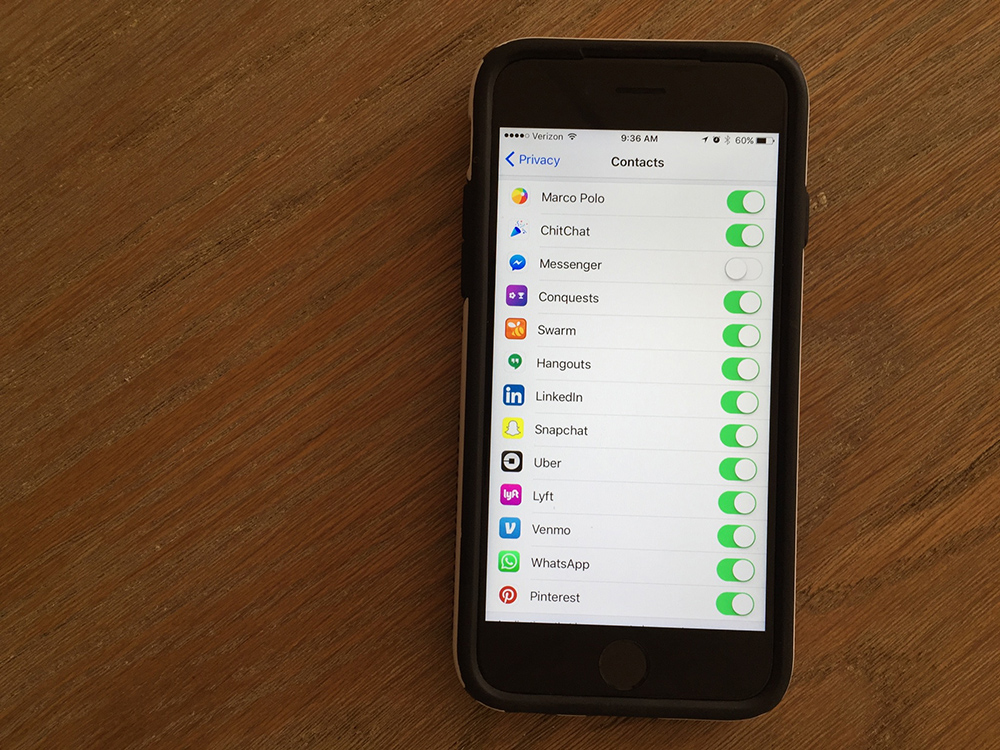 Communal Economic Benefits Made Data Collection Worth It

Our participants were familiar with privacy settings and had no surprise or outrage about the data apps gathered about them. Not only were they not surprised, our participants had positive feelings about how these apps was beneficial not only to themselves, but to their communities. We were surprised that participants generally framed the benefits not only in terms of personal savings, but in terms of communal benefits.

All eight participants said that they wouldn’t be able to stay in the Bay Area if they didn’t work hard to save money. Getting discounts on necessities like groceries and coffee by purchasing through the app was a common money saving strategy. People had strong positive feelings about grocery store chain Safeway’s app and the Starbucks app because they believed they helped them continue living in their communities .

We were surprised that people also saw the Safeway and Starbucks app as helping them give back to their communities.

One participant used the Safeway app to buy food for a residential treatment facility where he volunteered. He shared that he could not afford to purchase and donate extra food without the app, so he credits the app with helping his community. 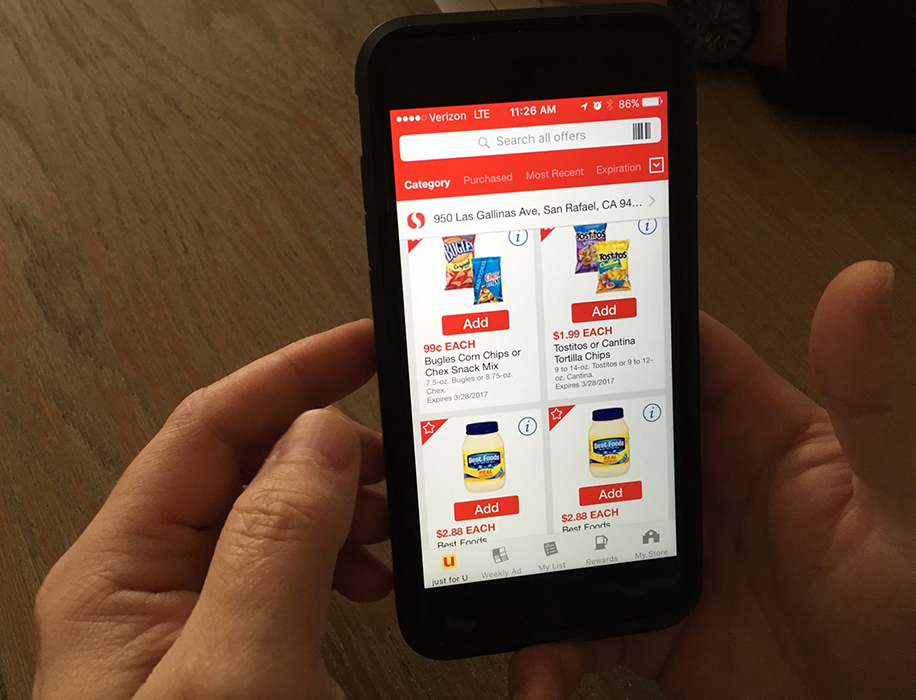 A participant who uses the Safeway app to donate food to a residential treatment facility reviews his latest money saving offers in the app.

Our participants rarely used cash for their purchases. In San Francisco, companies such as Square shaped a culture of credit and debit card use, even for purchases as small as a cup of coffee. Now apps and watches are quickly becoming standard ways to pay. 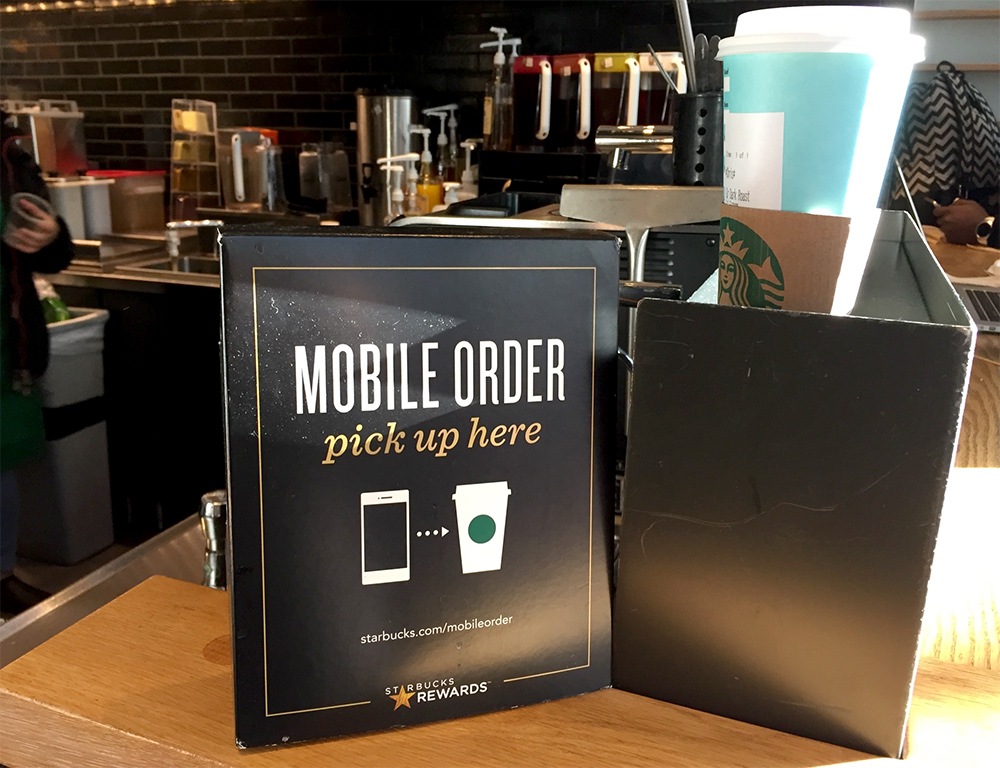 Sign for the dedicated line for orders made through the app at a Starbucks in downtown San Francisco.

We heard the expected stories of personal convenience when ordering coffee via the Starbuck’s app. Anecdotal observation at three Starbucks in downtown San Francisco during morning rush hour showed lines of more than twenty people mostly paying with cards, and separate, faster queues for people paying by app. We were surprised to learn than there is no way to add a tip to a credit card or debit card payment at Starbucks. Two participants shared that the only way to give tips was through the app. When asked about leaving cash tips, they were puzzled and said it was possible, but unusual.

You can’t tip if you pay with a card because there’s no signing. I worked in food service, and the ability to tip is very important, so pay with app is a better choice. Pay with cash? No. That’s not really common anymore. – 33-year-old freelance graphic designer from Alameda, California.

Tech startups as good for communities

Our participants believe the tech industry is an important part of San Francisco and were proud to support it, both by working in it, but also by contributing their data via apps. Three of our participants worked in tech marketing and felt strongly that the industry helped keep neighborhoods vibrant and provided work to people. They were proud that startups “stood up for the little guy” and talked about how apps such as Cups, which gives discounts at multiple independent neighborhood coffee stores, were a way to help “mom and pop, brick and mortar” stores stand up against chain stores.

![California gay pride hat.](/images/blog/2017/pridehat.jpg)
Study participant who worked in marketing for a startup and was unconcerned about data collection.

The participants’ strong positive feelings about the apps and their perceived community benefits were surprising. Our discussion about risks of data collection by private companies or consequences of government data collection faltered. Even though four of our eight participants told stories about being profiled or harassed for being non-white, a religious minority, or LGBT, they were unconcerned about personal risks from apps.

I hate when people say ‘well what do you have to hide?’. I have a Muslim name and get regularly asked where I’m really from. I do not take it lightly. But using these services [retail apps] is a requirement for participating in modern society. That’s the way it is now.” – 26-year-old graduate student from San Jose, California.

Simply Secure is a nonprofit focused on security, privacy, transparency, and ethical software, so hearing strong opposition to privacy measures was disappointing. It made us appreciate how complex the technical, social, and economic systems are and how much additional work is necessary to raise awareness and change the culture of data sharing.

We look forward to delving deeper into this research, and trying alternate approaches to uncover opportunities for personal data marketplaces

Briar: Notes From An Expert Review

Researchers who want to evaluate software interfaces have a number of tools at their disposal. One option for identifying obvious and significant problems is an expert review, which is often used to catch low-hanging fruit before performing any kind of user testing. Expert reviews employ usability heuristics, which systematically explore potential problems with a piece of software by applying patterns for good design. With some guidance from UX-research veteran Susan Farrell, we recently performed expert reviews of a few open source tools for encrypting communications.

We talked to Tails about user research as part of the development process.

Simply Secure provides resources for professional user researchers who want to further grow their skills and knowledge of best practices, with an emphasis on information security topics