Last week, I encountered discussions of drones in two unimaginably different contexts: in an academic presentation at USENIX Security 2016 and on the TV comedy Portlandia. As distant genres, they offer different perspectives that have equally important UX implications for privacy preservation.

In the opening keynote of USENIX Security, Dr. Jeannette Wing examined the trustworthiness of cyber-physical systems, which are engineered systems with tight coordination between the computational and physical worlds. Some of her examples included the Nest thermostat and the Apple watch, which are very exciting user experiences to UX designers. To a designer like me, her concrete, design-based examples set an inviting tone for such a technical conference.

Drones from a technical security perspective

Dr. Wing spent time exploring points of vulnerability in which the integrity of systems, such as drones, could be compromised. This uncertainty needs management at multiple levels. For example, drones need to manage unexpected atmospheric conditions and sensor malfunctions while still operating safely. However, when flying and data collection already draw on limited battery life, there's barely power left for anything else. Dr. Wing called for securing the full set of software running on IoT devices, from low-level device identity in hardware through secure boot and storage up to encrypted communications and secure configuration. 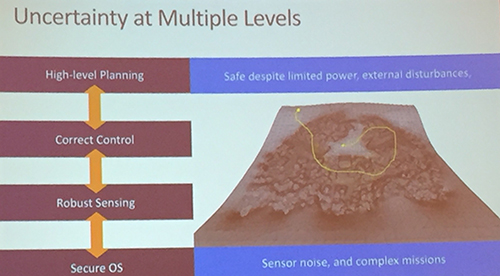 But preserving privacy is more than just a technical stack; the challenges that users have when operating drones contain UX lessons for privacy preservation. For that, we turn to Portlandia, which picks up where Dr. Wing dropped off.

In the "Pickathon" episode of Portlandia, the two protagonists use drones to experience the Pickathon music festival virtually. By flying their drones to the front row of the concert, the two operators can see and hear everything from their couch. Although they manage to avoid long lines and smelly port-a-potties, their impact on the physical world is still felt: They injure other concert-goers—intentionally or not—as they navigate the festival.


The plot points of the sketch unpack UX for privacy in a humorous way:

Drones are a useful example when considering privacy because they make every actor in the system visible. In contrast to contexts such as mobile messaging on a phone, drones are less abstract because you can see the operator, owner, and subjects under observation.

Drones are complex cyber-physical systems with poor ability to disclose how they work to bystanders. In contrast to the relatively well-understood domains of email and mobile messaging, privacy-preserving measures for drones are significantly more complicated. Because the challenges for drones are new to both the public and the technical community, they provide an opportunity to engage a mass audience in critical thinking about how we want to interact with the systems.

Through drones, designers can explore particular challenges such as alert management. By thinking about how multiple parties (owner, operator, subjects under observation, privacy advocates, etc.) want to interact with drones, thoughtful UX design can empower people to manage their privacy in a variety of contexts.

Are you stuck on how to build or communicate a feature? Not sure how to get user feedback? Want to learn more about how the consent user experience has changed? Are you eager to find out how to navigate design choices while prioritizing human rights? Is digital infrastructure funding a topic you are keen to hear more about? Want to dive deep into data colonialism? We have some answers.

We interviewed Marcel Schouwenaar from The Incredible Machine on his prototype, a transparent charging station.