Designing From the Ground Up: A Case Study on I2P

The Invisible Internet Project (I2P) is a network layer that allows for censorship-resistant, peer-to-peer communication. Anonymous connections are achieved by encrypting the user’s traffic and sending it through a volunteer-run network of roughly 55,000 computers distributed around the world. It is similar to the Tor network, but focuses more on accessing hidden services than the Clearnet. 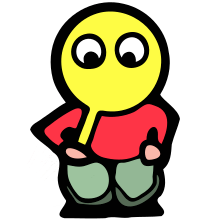 This project, a collaboration between Simply Secure and Ura Design, provided usability feedback and strategic proposals for I2P. The goal was to make I2P a more usable tool for novice users, thereby adding to network traffic and anonymity guarantees for all users. While Simply Secure focused on a heuristics review and a workshop on information architecture, Ura Design will take on I2P’s brand identity as well as the console redesign. ̨̨̨̨̨

I2P’s biggest challenge in onboarding new users is explaining its complex technology in an accessible yet accurate fashion. The website provides a lot of information, but both the content and the navigation confuses new users. 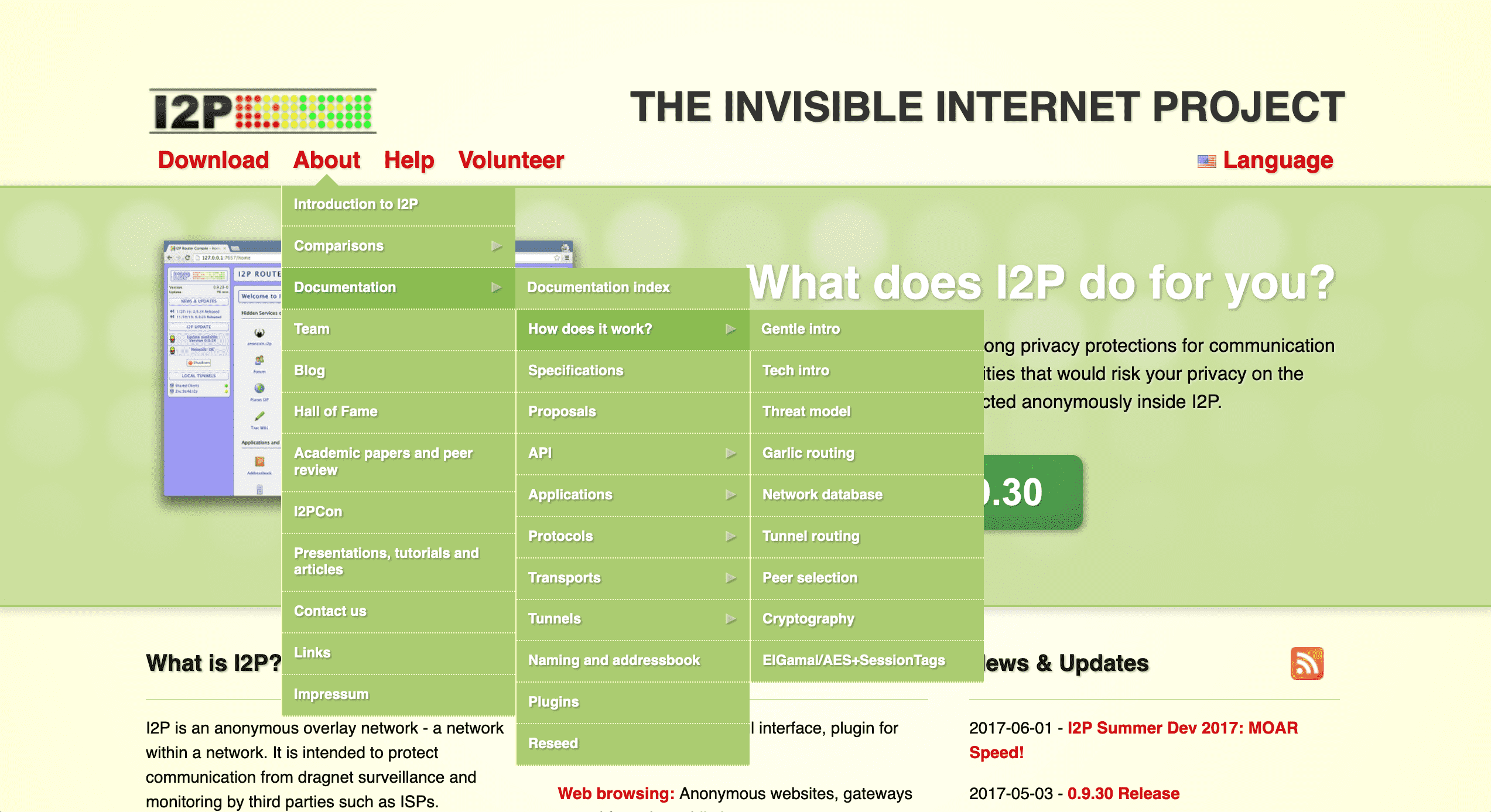 2017 version of I2P’s IA, which has since seen many updates.

The reasons for this are all-too-familiar: I2P’s long history as a volunteer-run open source project, the many different user groups it serves, and the inherent complexity of the technology itself all contribute to a large body of information on the website. Among the core audiences, we have new users, returning users, network operators, contributing developers, academic researchers, and the press. Contributing developers sub-divide into: core protocol developers, application developers, and router developers. Needless to say, that is a lot of technical information that needs to be documented and communicated, and the lack of a separate documentation only exacerbates the architecture here.

Is a toot different from a tweet? Mastodon, a decentralised alternative to Twitter, is helping and not helping by using alternative terminology. Yes, a toot is different from a tweet—a toot is often only shared with people in your Mastodon community, whereas a tweet is always public; and no, tooting is just the cool kid’s word for tweeting, the core idea is the same.

I2P has a similar issue with its relationship to the Tor project. Both are network layers operating on top of the internet, both aim to preserve user’s privacy and anonymity, both are community-run open source projects, and have an academic following. However, the Tor project much more known and used, and having diverging terminology for these two projects is confusing to most users, who will be more familiar with Tor.

Related to terminology, there is a deeper question of what the term “I2P” stands for. Is it an animal, a vegetable, or a mineral? Users need to create a working mental model of the technology to use it confidently. Right now I2P stands for both a network, a protocol, a community, a collection of websites (“eepsites”) and is associated with tools like the “I2P router”, “I2P console”, and “I2P browser”. How do things fit together in this universe? What are the nouns and the verbs that people absolutely need to understand to operate in this universe?

When users encounter new technology, they are asking four kinds of questions:

It’s important that these questions are answered — not necessarily in this order, and not necessarily at the same level of detail, but ideally in separate, navigable sections on the homepage or “about” page. This could also come in form of a high-level guide to the ecosystem (a diagram, a glossary, an example workflow), as well as clear explanations that use metaphors and illustrations to support building new mental models.

We worked with the I2P team in March/April 2020 on two items: 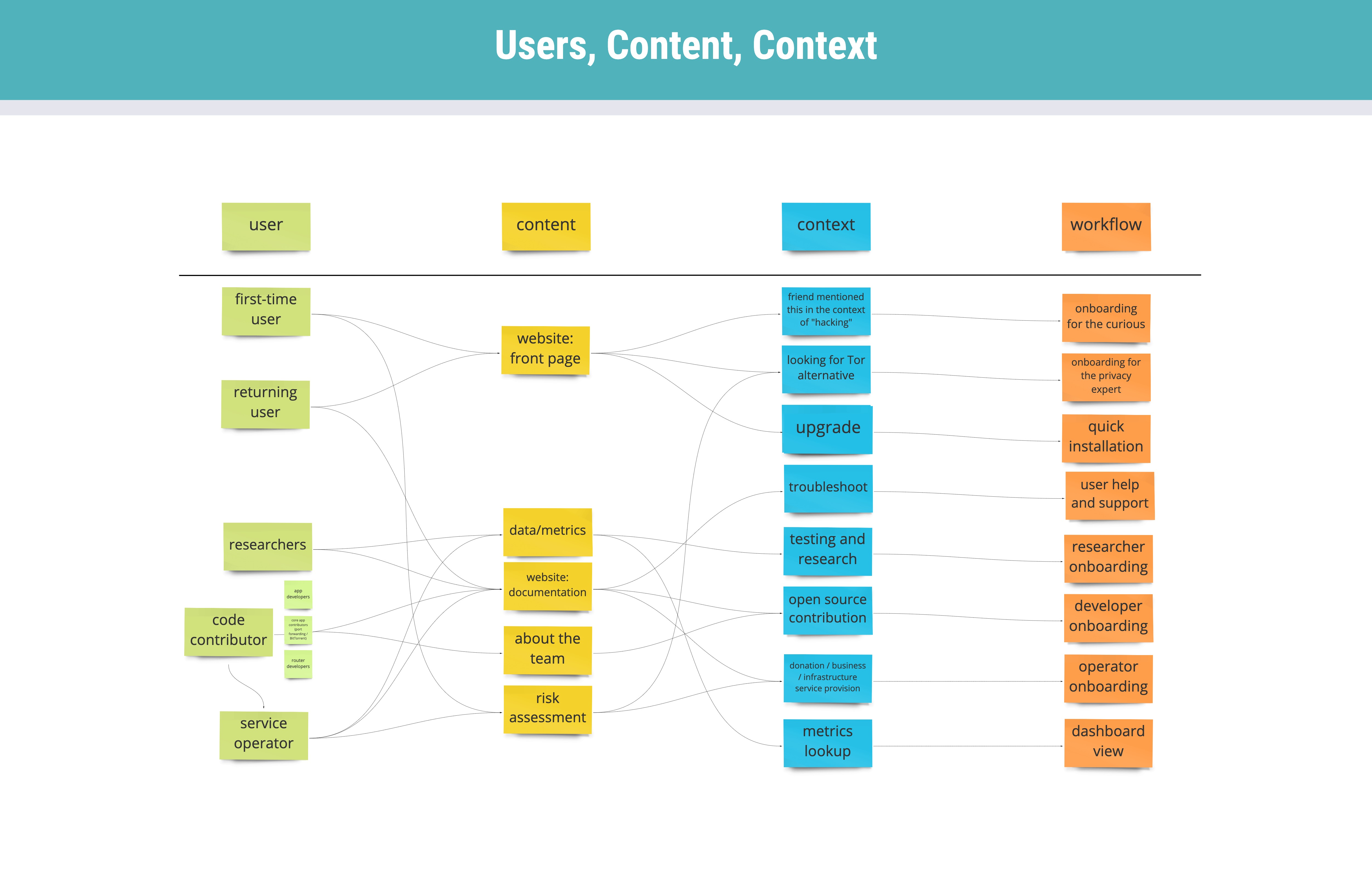 I2P is a complex project with many moving pieces—and that won’t change anytime soon. To help users navigate the website, we want to distinguish three larger contexts going forward: learning (for learning about the project), guides (for installation and network operation), and documentation (for code contributions). Furthermore, we applied a generic navigation for standardized way-finding. The result is a sitemap that is deep rather than shallow: fewer items are surfaced at first to not overwhelm users. 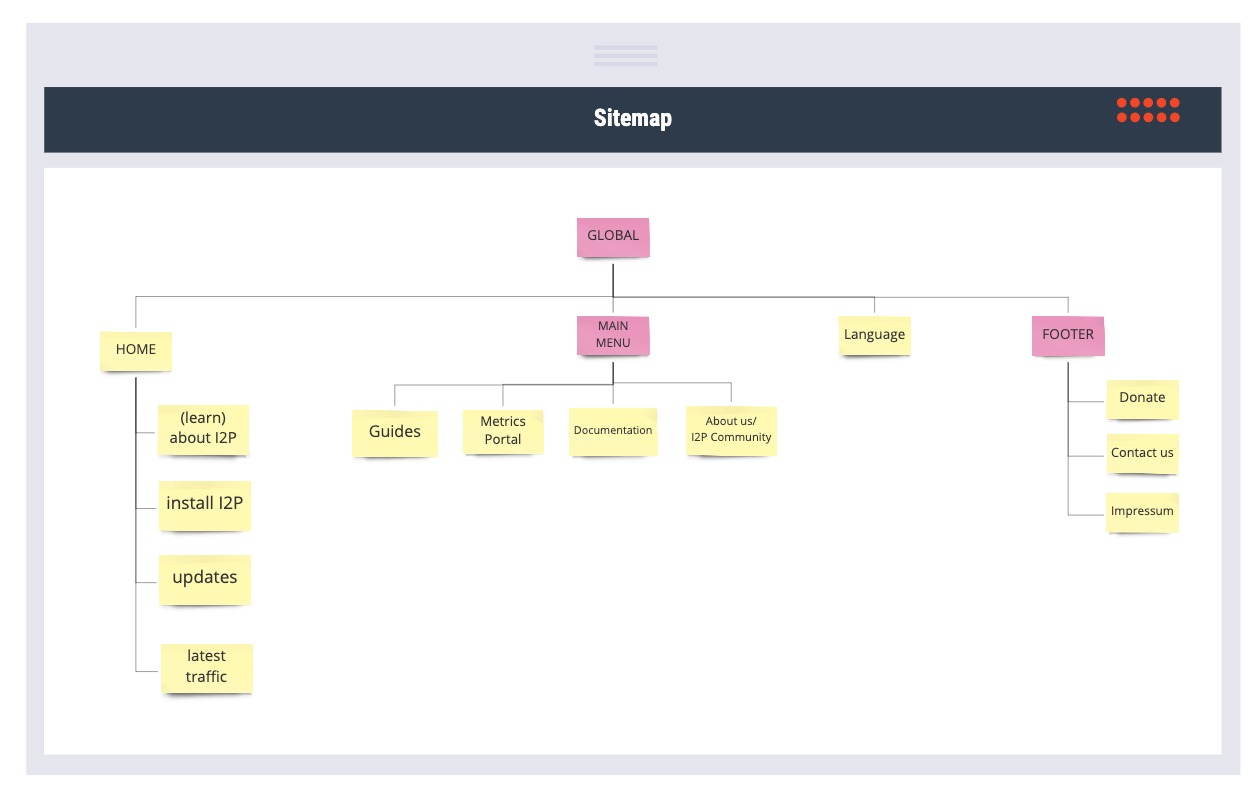 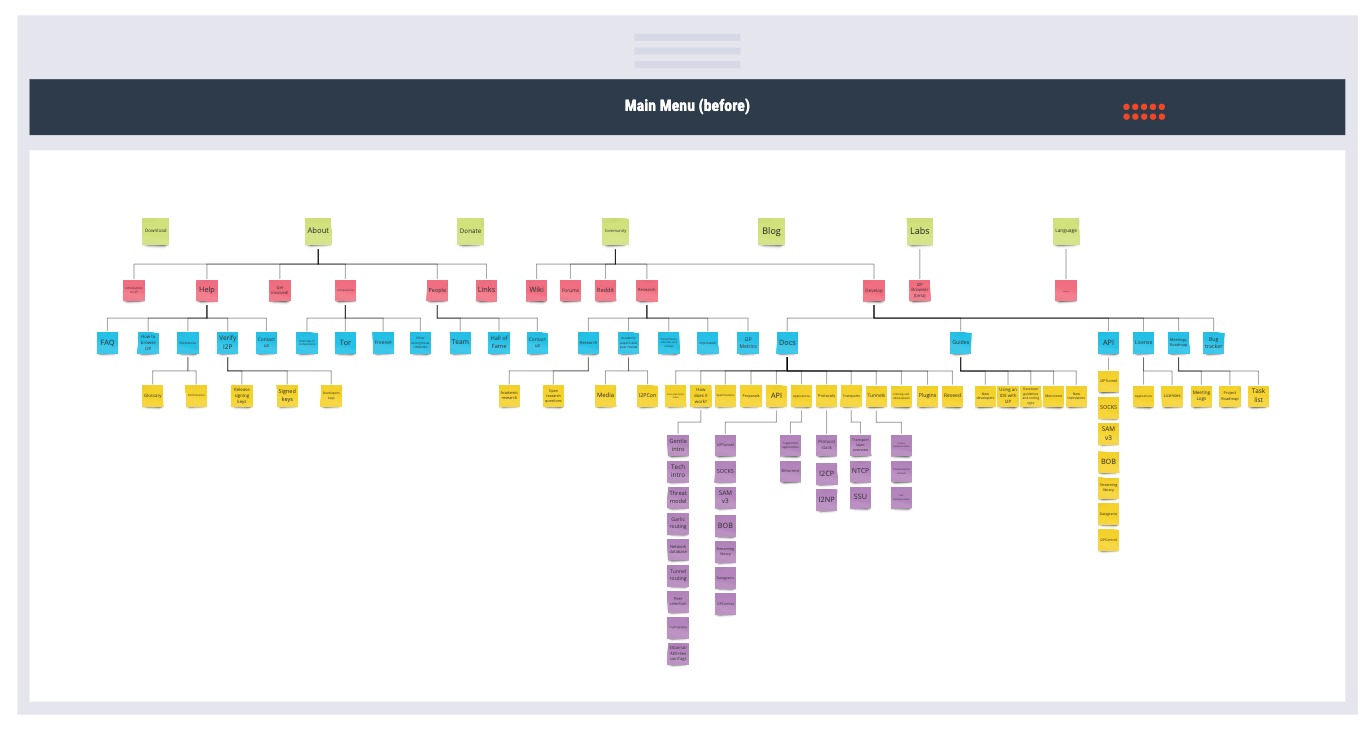 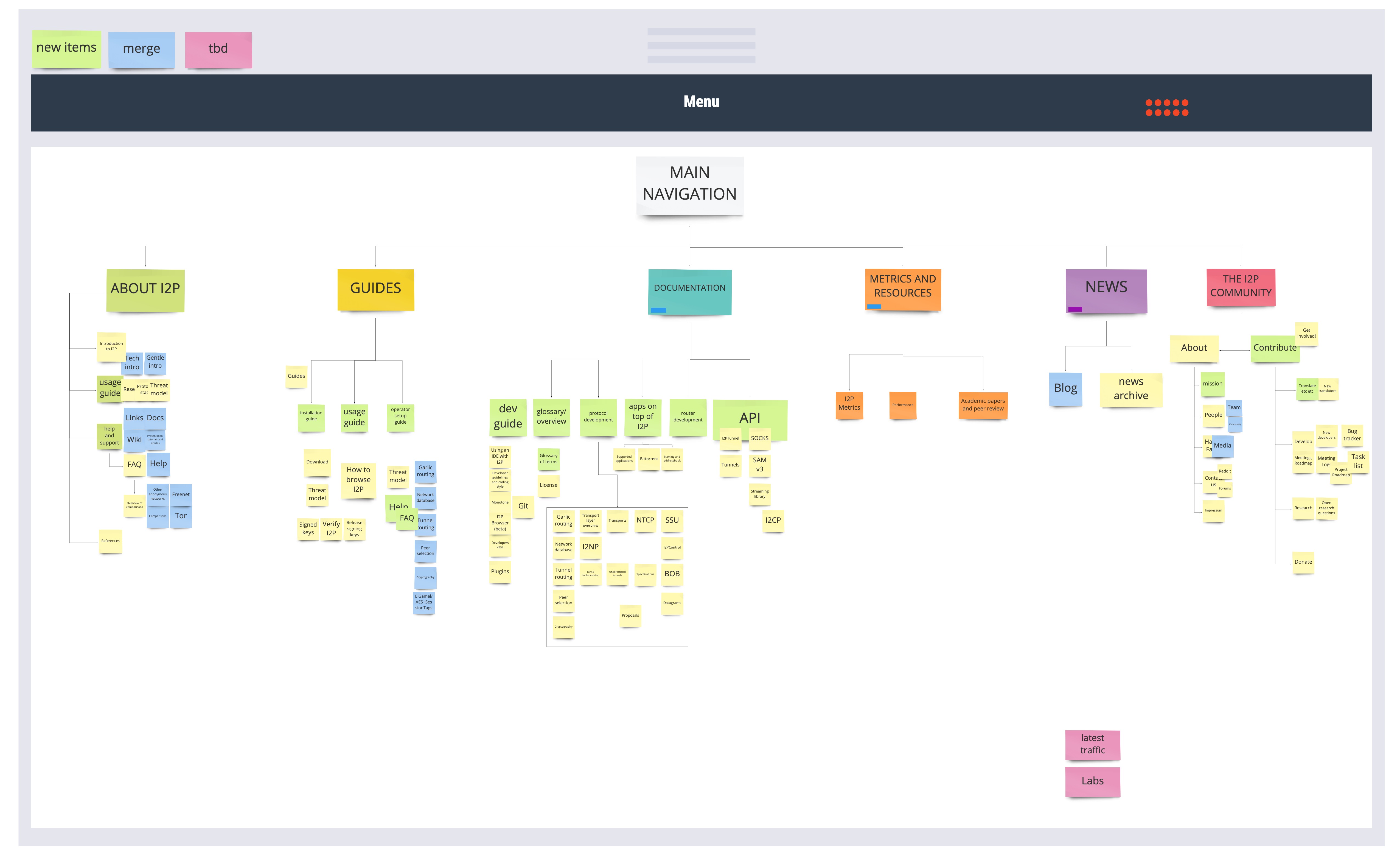 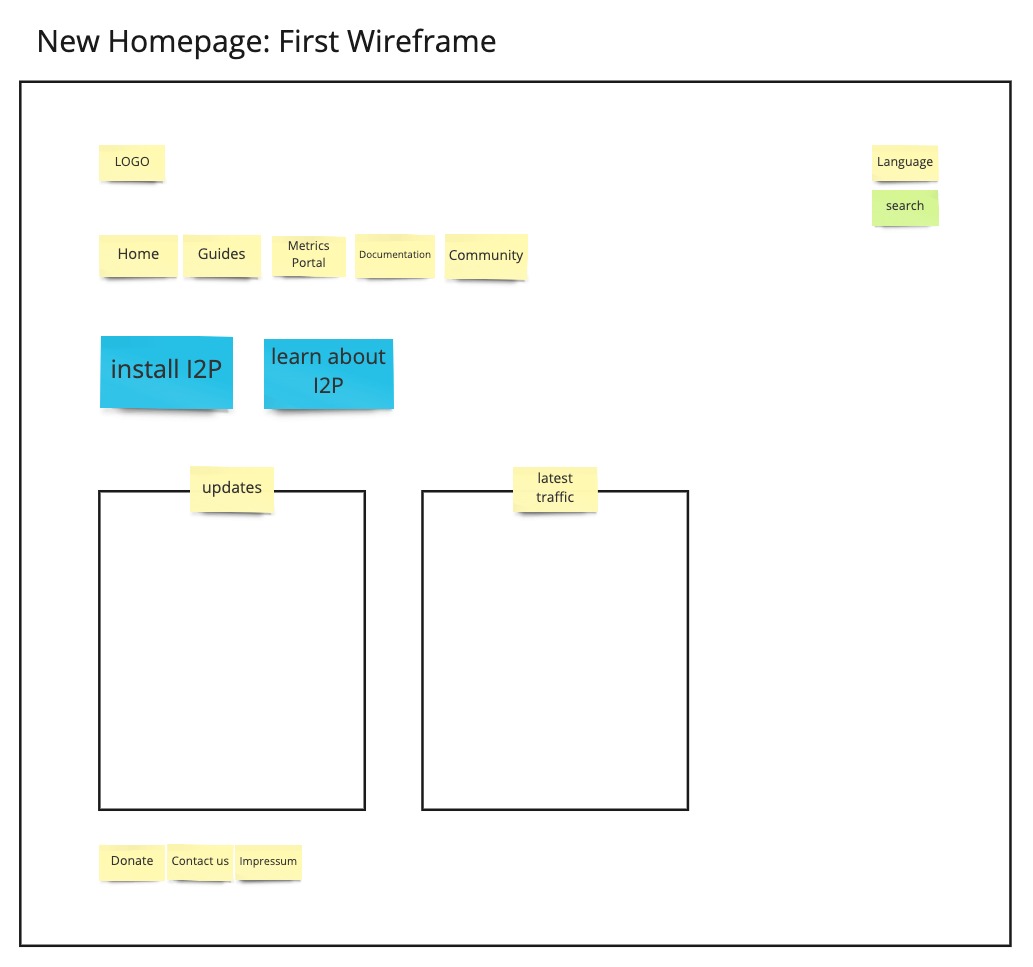 The console’s architecture also received an update. Most of the changes revolve around grouping settings and configurations in a way that reduce the information presented at the same time (resulting in “deeper” trees again). One design question concerns “help and support” within the I2P console vs on the website (not always accessible once you are connecting over I2P). Should both sites have the same content for familiarity? Or should they differ because not every FAQ item is equally relevant? For instance, you wouldn’t lookup how to install I2P if you made it onto the I2P console. This is open to testing, but for now we opted for a “help and support” that is more relevant for the current context. 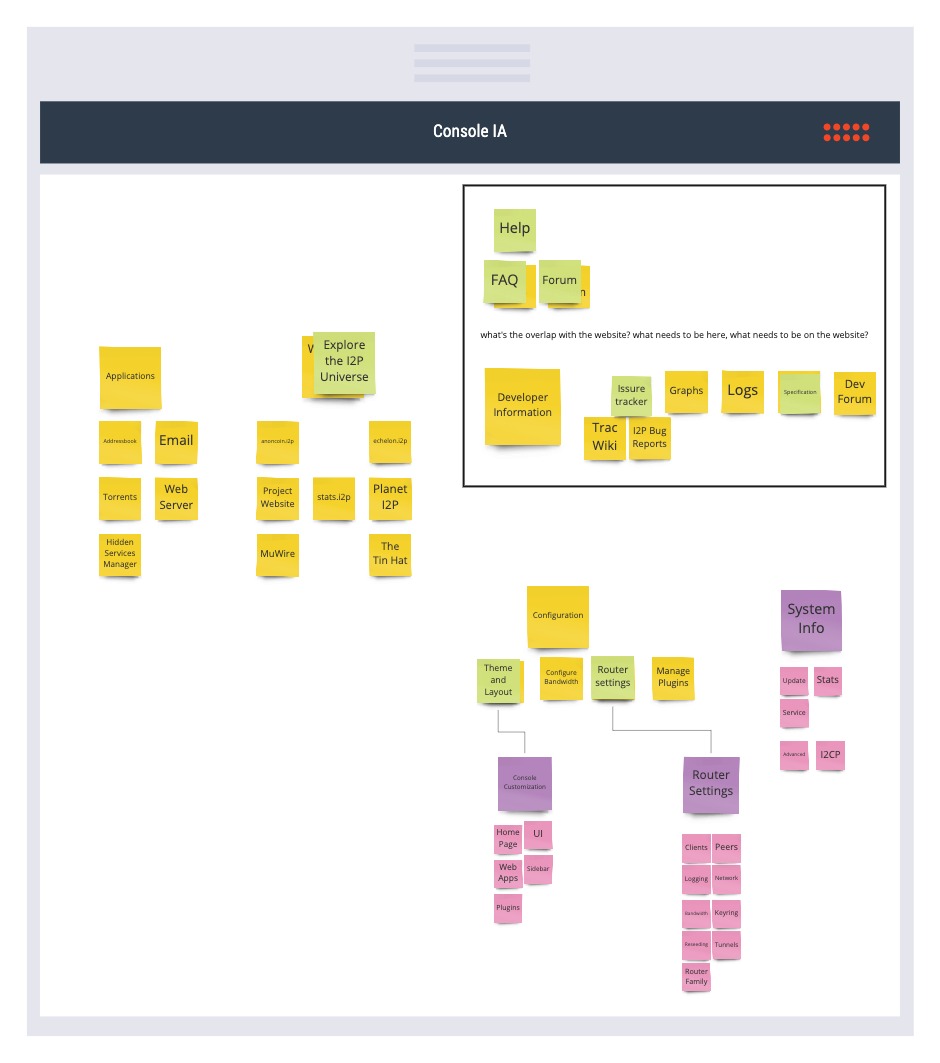 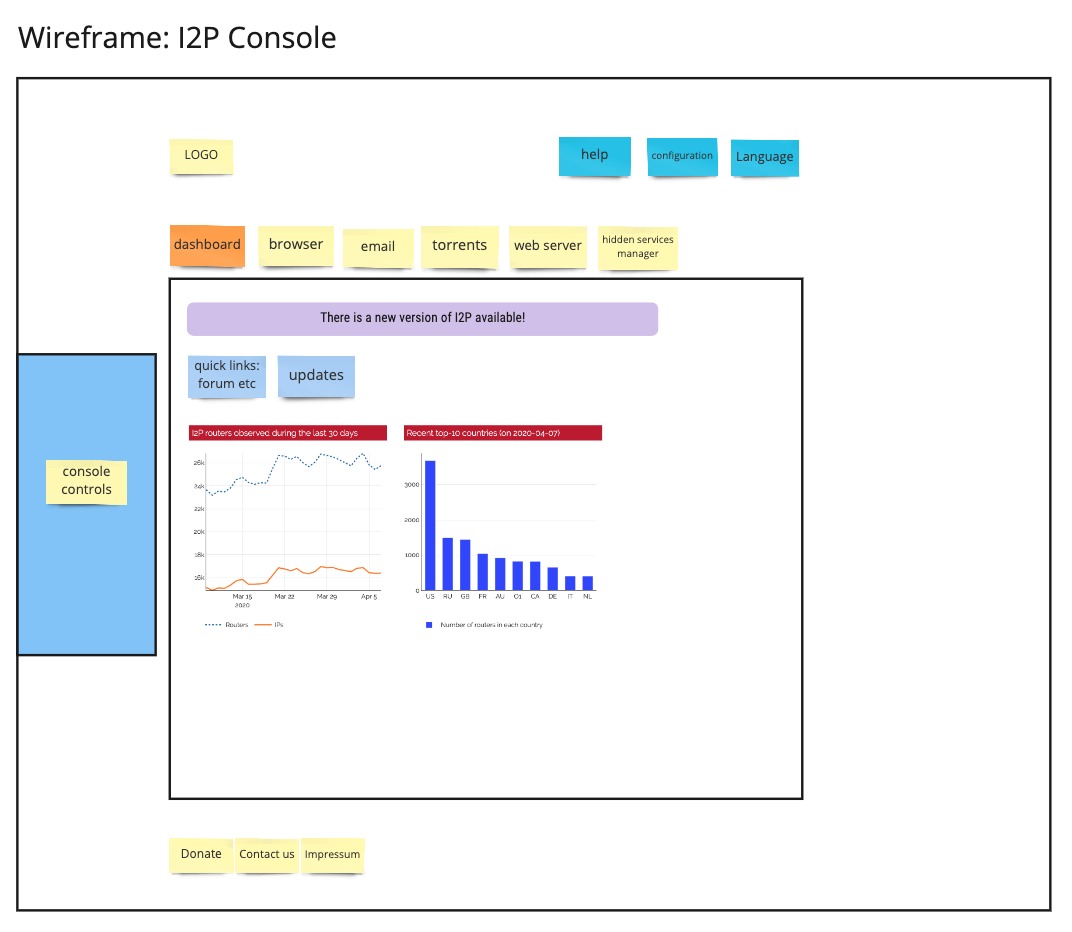 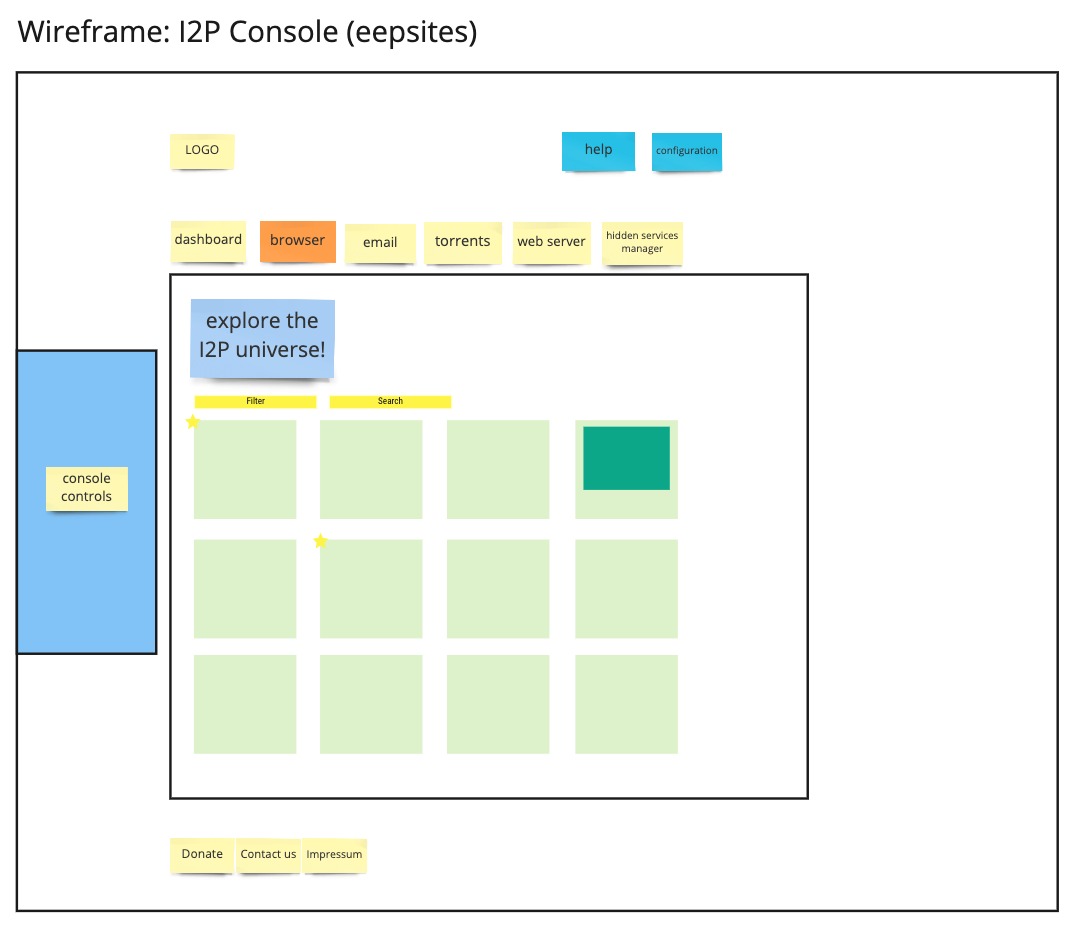 To support implementation, we also sketched first wireframes, both for the website and the console. The console’s main function is to control the connection over I2P; that will remain on the left as a side bar. The rest of the console is now a center stage with tabs—all familiar UI patterns. That allows the user to navigate different, additional functions of the console: a dashboard, a “browser” to explore other eepsites, an email client, and other applications. Configuration and support remain on the top right for constant reference.

From now on, I2P will adopt more consistent language around its many tools. We have started working on a controlled vocabulary:

In the course of our design, questions around mental models kept resurfacing. Current users are expected to download a package installing the I2P launcher which in turn opens a browser console which in turn allows you to connect over I2P… Anything reducing the number of steps required to get started would go toward wider adoption. The choice of UI depends on the scope of the console. If the I2P console should change all network connections over to I2P, then new users should install a general console application (similar to, for example, Mullvad’s VPN menu control). If the I2P console should only change the protocol for a specific browser, then new users should only have to install a browser extension. That way, users only have to make changes within one context to use the I2P network. 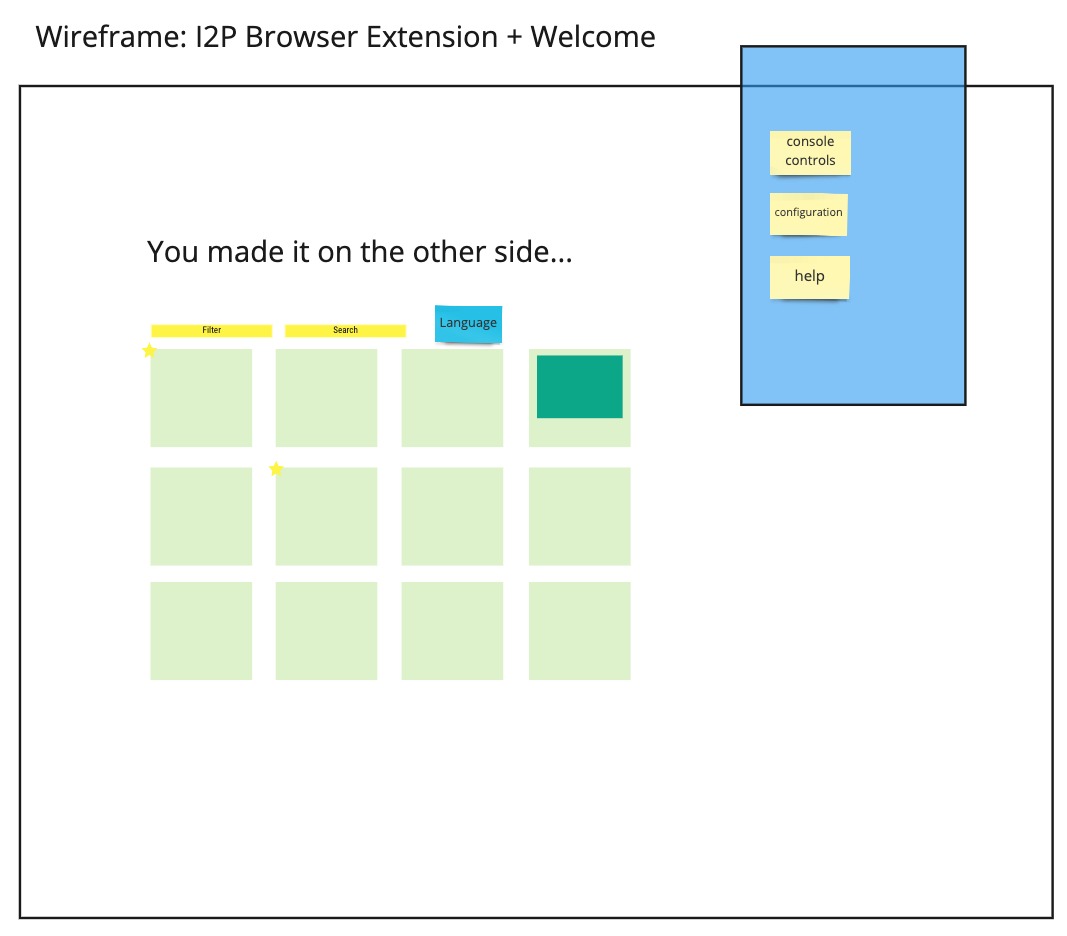 Going forward, the I2P team will do well adopting the following design practices.

This project began as an information architecture project: in sorting through how information is classified and presented, and in analyzing different users and contexts, we arrived at a cleaner and more focused version of the website’s and console’s information architecture. But looking at IA is also looking at how things fundamentally fit together, and that surfaced underlying questions around strategy. What tools and processes make most sense together? Which users and use cases do we want to prioritize? Answering these questions ultimately made decisions about terminology, content, and architecture easier.

Another insight was that the typical user question around “how does it work” isn’t just about the underlying technology, but also about how one should use it. A protocol can be realized in many ways; the decisions of the I2P community to use a launcher, a browser, and a console is just one way of using the I2P protocol. While users need to learn about the features of I2P, it is equally important to explain how these different tools and processes work together. To that end, diagrams or videos could help illustrate these concepts.

Finally, a tactical design recommendation: when technology is new, rely on familiar patterns as much as possible. New users will be struggling with concepts around routers, peers, and I2P sites. Designers should give users a handrail to grab onto, even if it’s just calling the Internet “the Internet” (rather than “the Clearnet” from the vantage point of I2P).

This project was funded through OTF’s Usability Lab.

Meeting users' needs is an authentic way to contribute to developing trust. Eileen and Molly discuss in this episode of Tea Time.

Simply Secure's take on branding in open source, with a case study on Tails.

Inverting Power Imbalances in the Peer Review Process with PREreview

For the past two years, we’ve been working with PREreview to promote equity in academic publishing by helping to build a new open source platform that supports a more inclusive, community-oriented form of peer review and publication.